Learn how you can use alternative investments to protect your clients’ retirement savings.

Your clients may get to pick when they want to retire, but they don't pick where the S&P 500 is when that time comes. Protect your clients’ portfolios from market volatility so that their retirement date doesn't get derailed or pushed back. Having an allocation to alternatives in retirement assets can offer diversified strategies for reducing risk and attaining excess returns. 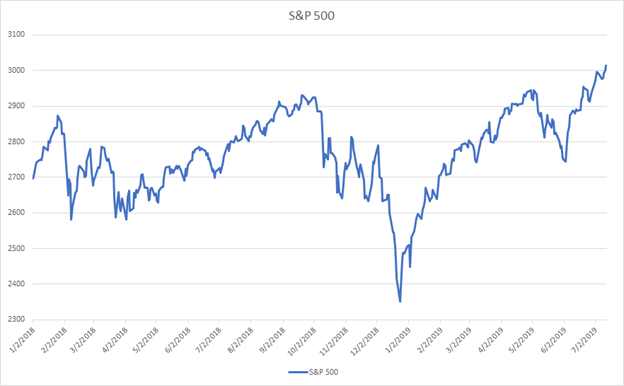 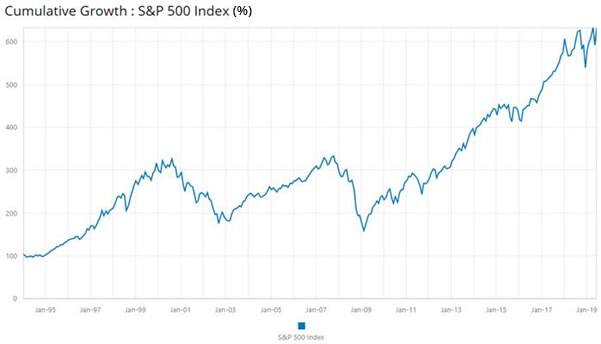 The Case for Alternatives in Retirement Assets

Advisors should use all asset classes—not just stocks and bonds—to help clients achieve retirement savings goals through all market cycles. Advisors should consider alternatives in retirement assets with little correlation to the stock market, such as hedge funds, private equity, real estate and other untraditional, or alternative, investment vehicles. ¹

In order to make a significant difference in a portfolio, a client approaching or in retirement should have at least 10 percent allocated to alternatives in retirement assets. That, financial advisors agree, will provide clients a better long-term return, with fewer scary periods of poor performance.¹

A client approaching or in retirement should have at least 10% of retirement funds in alternative investments.

Key Findings of the Research

The strategic use of alternative assets in a TDF structure, or a diversified TDF, demonstrates that including these asset classes can improve expected retirement income and mitigate loss in downside scenarios. As modeled for this analysis, a diversified TDF increases the amount of annual retirement income that can be generated by converting a participant’s DC balance into a stream of income at retirement by 17% or $9,200 for every $100,000 of pre-retirement annual wages in the expected case (50th percentile) or by 11% or $2,300 in annual retirement income in a worst-case or downside outcome scenario (5th percentile) (Table 1).

A diversified target-date fund portfolio generates about 17% more than an undiversified portfolio for each $100,000 in annual pre-retirement wages.

Having alternative assets in a defined contribution plan in retirement, according to the study, improves the probability of not running out of money over a 30-year retirement period and “provides higher expected returns and lower downside risk at the time of retirement.”

3. Wealth Accumulation over the Long Term

While equities provide strong returns over the long term, the case for holding more than just stocks is that it can take them long periods to obtain their strong returns. In the meantime, sometimes over 10-year return periods, equities could hurt those in retirement during shorter holding periods.

Alternatives can smooth out returns during periods when equities are doing terrible, such as the lost decade at the beginning of the century. The case for alternatives is underscored by the recent decade, during which stocks shined. When stocks return to the mean, that will have an impact on investors in the middle of building retirement nest eggs. To mitigate that volatility, alternatives can have a really strong effect on wealth accumulation.

Alternatives are in Vogue

Recently, three major studies were released backing up the trend toward including a part of institutional investment portfolios dedicated toward alternative assets.

Assets of the 49 largest private foundations reached $226.3 billion in tax filing year 2016. That is up 3.5% from $218.6 billion the year before and up 29.3% from $175 billion in 2007, according to a study published in November 2018 in Pensions & Investment magazine. Most of that increase comes at the expense of traditional asset classes like stocks and bonds. ³

Since 2007, foundations have significantly increased their allocations to alternative investments such as private equity, hedge funds and real estate — according to the tax filing data.

Separately, a study in September 2018 by The Pew Charitable Trusts of public pensions’ asset allocation showed a sharp rise in alternative investments over the past 10 years. ⁴ See graph below. 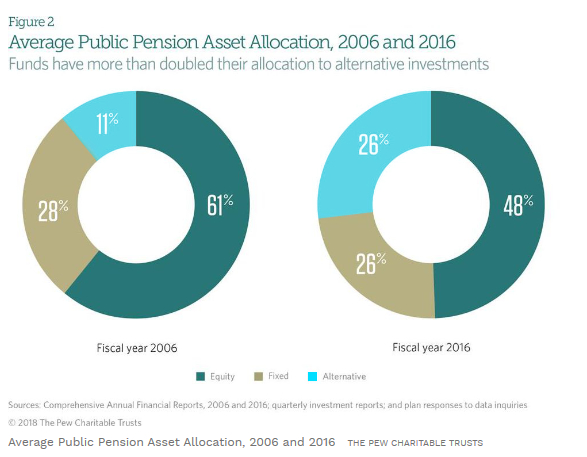 Public pensions’ asset allocation showed a sharp rise in alternative investments over the past 10 years. ⁴

In a more recent study, public pensions increased private equity allocations to 10.2% on average in 2018 from 5.6% in 2008, a trend likely to continue in the hunt for yield. Mega plans are hiring more staff to internally manage private equity and other alternative assets, which they expect to beat stocks in the future. The Texas Teachers’ Retirement System invests 40% of its portfolio in alternatives and plans to double its staff in five years. 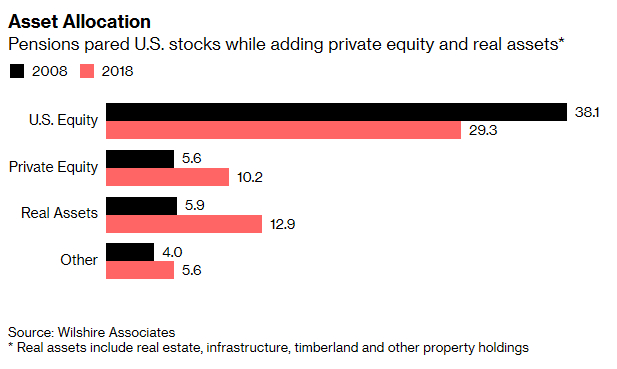 There are over $25 trillion dollars held within U.S. retirement accounts, and less than 2% of those dollars are invested in alternatives. Unfortunately, most retirement investors are incorrectly led to believe that investment options are limited to traditional publicly traded securities.

Professional investors that watch over assets of institutions, allocators and family offices have continued to increase their allocation to alternative investments. Independent financial advisors should clearly take notice and ensure their clients’ retirement portfolios are well positioned and incorporate alternative investments.