The market has been on a roller coaster ride in 2020. The S&P 500 began the year extending its longest-ever bull market, which began after the 2008 financial crisis, and hit an all-time high in February. In March, the index fell more than 20% from that high into a bear market as the coronavirus pandemic sent investors into a tailspin.

After its March low, the S&P 500 rallied about 60% to notch another all-time high in early September. But following the record, the index has slumped, keeping investors on their toes.

The CBOE Volatility Index - the VIX, which is commonly referred to as the stock market's fear gauge - is trading at fairly elevated levels and suggests more volatility for months to come, regardless of the outcome of the November election. 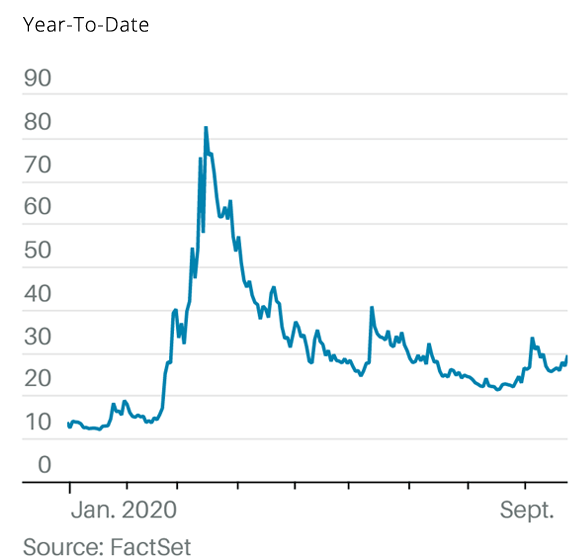 ELEVATION
...but remains solidly above its long-term average. Realized vol has backed it up. 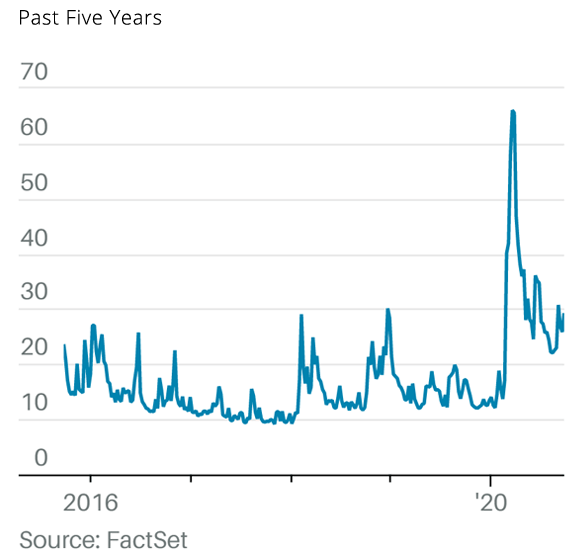 Sources: CNBC, Sep 24 2020. How to navigate volatile markets during retirement; Business Insider, Sep 23 2020. Don't fear the VIX. Volatility is here to stay for now, and that's no bad thing; Barron’s, Sep 24 2020. Stock Market Turbulence Is Here to Stay. How Protect Your Investments.

Hedge fund managers that have successfully navigated their way through the first half of this year and are producing good returns are in demand by institutional investors that are adding more hedge fund exposure to their portfolios and/or are upgrading lackluster managers with better choices.

"There's a sense of optimism from hedge fund managers, backed up by investors," said Thomas P. Kehoe, managing director and global head of research and communications for the London-based Alternative Investment Management Association.

"More investors are interested in hedge funds and are seeing a real tool they can latch on to in this difficult environment for preserving capital, managing volatility, mitigating risk and producing returns," Mr. Kehoe said.

From conversations with asset owners, Mr. Heinz said, "I don't think there has been this much institutional interest in hedge funds over the past 10 years."

Based on a recent survey completed by 300 sophisticated investors about what type of hedge fund strategies and managers they are interested in meeting, here are key observations:

Stretched valuations and the resulting pullback in equities have prompted more interest in long/ short equity hedge fund strategies that can provide some protection against market declines and wild swings, hedge fund and asset managers say.

Long/ short equity hedge funds, which bet on stock prices rising and falling, lost an average of 5.75% in March when markets plunged. But they went on to gain an average of 13.67% in the first eight months of 2020 and were the best-performing strategy in August, according to data from investment bank Nomura.

Part of the protection long-short funds offer is by “shorting” -- borrowing a stock or security from an institutional investor, then selling it back when the price falls, pocketing the difference.

MULTI-STRATEGY HEDGE FUNDS RULE THE ROOST IN 2020
Net returns up to end-August (%). 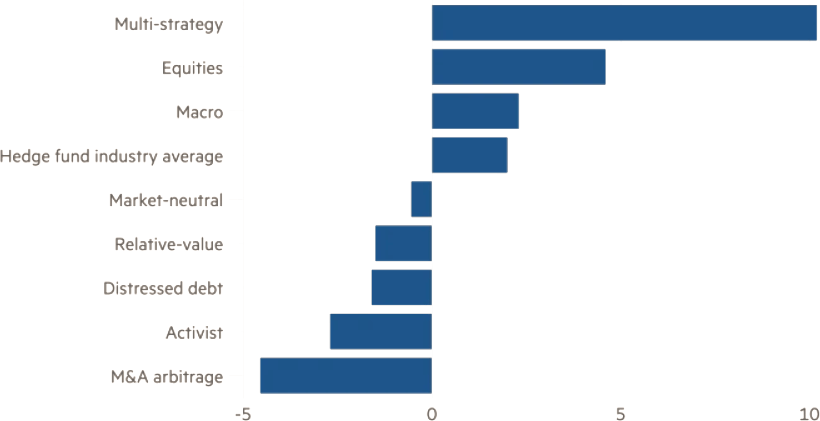 Look at the best performing hedge fund strategies this year for a clue as to where the industry is heading.

Diverse, “multi-strategy” vehicles run by the likes of Citadel, Millennium, Balyasny and Point72, which marshal an army of fund managers, traders, analysts and risk managers, have been the big winners. They have returned more than 10% on average in the year to end-August, according to industry data firm HFR.

Dmitry Balyasny’s Atlas Enhanced Fund is the leader, notching up a gain of almost 23% up to the end of August, according to an investor document seen by the Financial Times. Sculptor Capital Management — formerly Och-Ziff — has also managed to dust itself off after a period of disappointing returns, the retirement of its founder Daniel Och and a scrape with the Department of Justice. It clocked a 12.5% return in its flagship fund.

After a four-month string of asset outflows from hedge funds in March through June, hedge funds continued in asset-recovery mode in August, with investors adding $7.36 billion to the industry last month, according to the just-released August 2020 eVestment Hedge Fund Asset Flows Report.

"The proportion of funds with inflows was nearly 60%, which would make August 2020 the second most broadly positive month for hedge fund asset flows in the past five years," said eVestment Global of Research Peter Laurelli, the report's author.

With over 25 years of alternative investment experience, we utilize our expertise and deep network to provide exposure to third-party institutional private equity and hedge funds for your clients' portfolios. We seek to identify those with a proven track record, a dedicated risk management process, deep teams and institutional safeguards. The managers on our platform collectively manage over $1 trillion in industry assets. Our manager selection process is conflict-free, as we are not compensated by any of the managers in the program. Take advantage of these opportunities for your clients’ portfolios.