Institutional investors continue to increase their allocations to alternative investments

Alternative Asset Allocation on the Rise

The industry “concluded its strongest first half of a calendar year” in terms of performance, says HFR President Kenneth Heinz.

“Equity long bias funds” led the way, returning more than 10.6% on average. These are funds run by managers who believe in largely unhedged exposure to the market. The category of “event driven” funds was the third-best gainer of the first half, returning 6.9% on average. These funds look for specific triggers that will move a stock or credit. The volatility in financial markets this year has sustained institutional investors’ defensive posture, which is increasingly focused on relative-value strategies—investments that bet on the realignment of securities whose prices usually trade in sync but have diverged.

Investing $4.5 billion of the Florida Retirement System Trust Fund’s money in hedge funds, Ash Williams is defensively targeting relative value, along with broad-trend exposure in global macro and managed futures, both of which aim to profit from market reaction to economic or political events around the world. “When you look at the entire global spectrum of investible assets,” says Mr. Williams, chief investment officer of the Florida State Board of Administration, “it’s hard to find anything that offers reasonable value. This begs the need for more insurance-like exposure.”

“The best hedge fund managers don’t need to offer discounts because they are in high demand.”

According to a survey conducted by Intralinks, from an alternative asset allocation perspective, some LPs believe that hedge funds as an asset class can still work, provided they have access to the best managers and have good relationships in the market. “The best hedge fund managers don’t need to offer discounts because they are in high demand. If you have access to the best hedge funds, you’re going to be doing well and making money in this volatile market. Problem is, they are all closed,” says a U.S.-based allocator.

Conversationally, I think people are more optimistic about hedge funds over the near term, on the expectation there will be some sort of liquidity crisis or sociopolitical crisis. Hedge funds perform best when interest rates are higher but also when there are periods of strong market uncertainty. Based on conversations I’ve had with other family offices, people are more optimistic about hedge funds for the next 10 years than they were in regard to the last 10 years.

Perhaps in anticipation of choppier waters ahead, against a backdrop of ongoing geopolitical tensions and a slowing global economy, hedge funds were cited as the second highest overweight asset class.

Anthony Gordon is principal of the eponymous Gordon Family Office. He confirms that the general sentiment is that the family office will likely look to increase its hedge fund exposure by approximately 10% over the next 12 months, and that its overall exposure to alternatives will also rise by that amount.

Some of the most famous managers continued to shine in 2018, such as Ray Dalio’s Bridgewater Associates, whose flagship Pure Alpha strategy generated 14.6% net of fees. D.E. Shaw Group produced similar returns for its Composite Fund, returning 11.2%, while another titan of the industry, Renaissance Technologies generated 8.5% for its Renaissance Institutional Equities Fund.

These managers are the apex predators, accessible to only the largest institutional investors.

Broadly speaking, five out of 10 investors felt that returns from their alternative allocation programs over the past 12 months were in line with their objectives, as figure 1 illustrates. One in five LPs felt they had exceeded expectations. 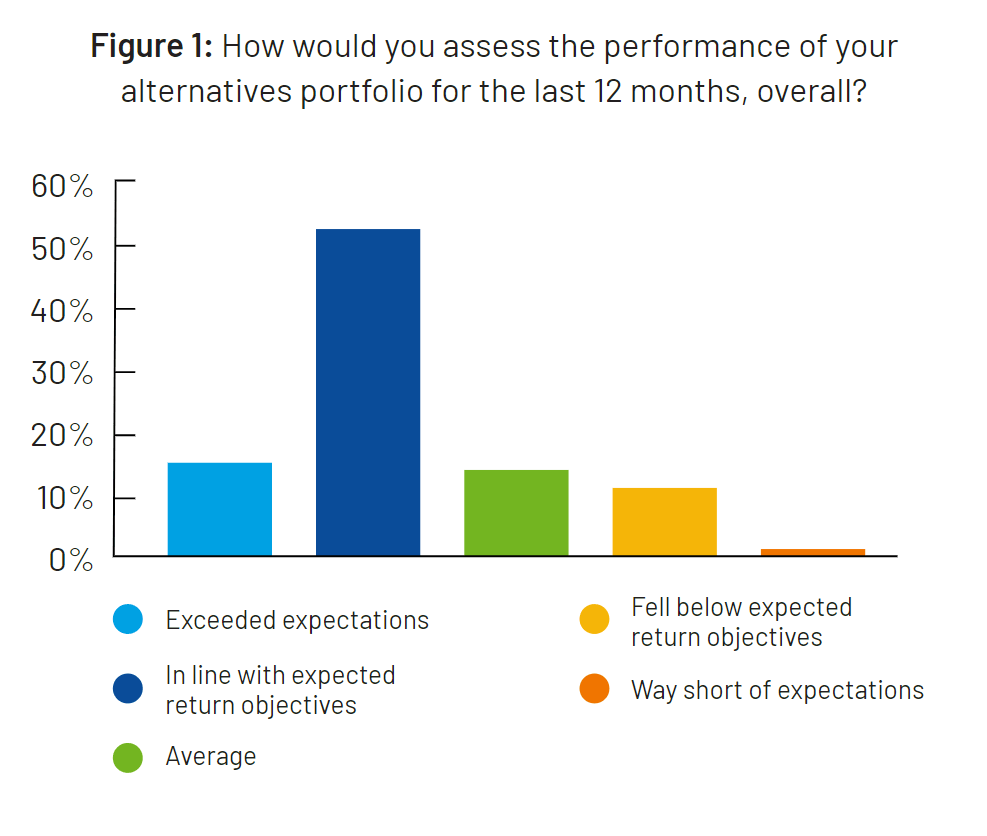 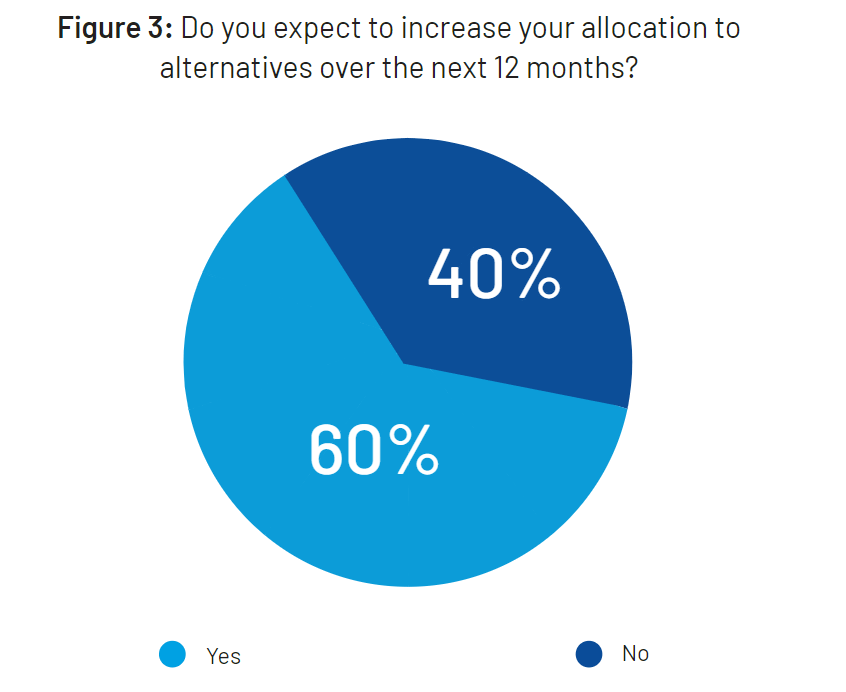 Interest in private equity shows no sign of abating

Drilling down specifically into individual asset classes, it becomes evident as to which GPs generated the best risk-adjusted returns.

Private equity, in keeping with its market-wide appeal, came out as the clear winner, cited by 45% of survey respondents (see figure 2). 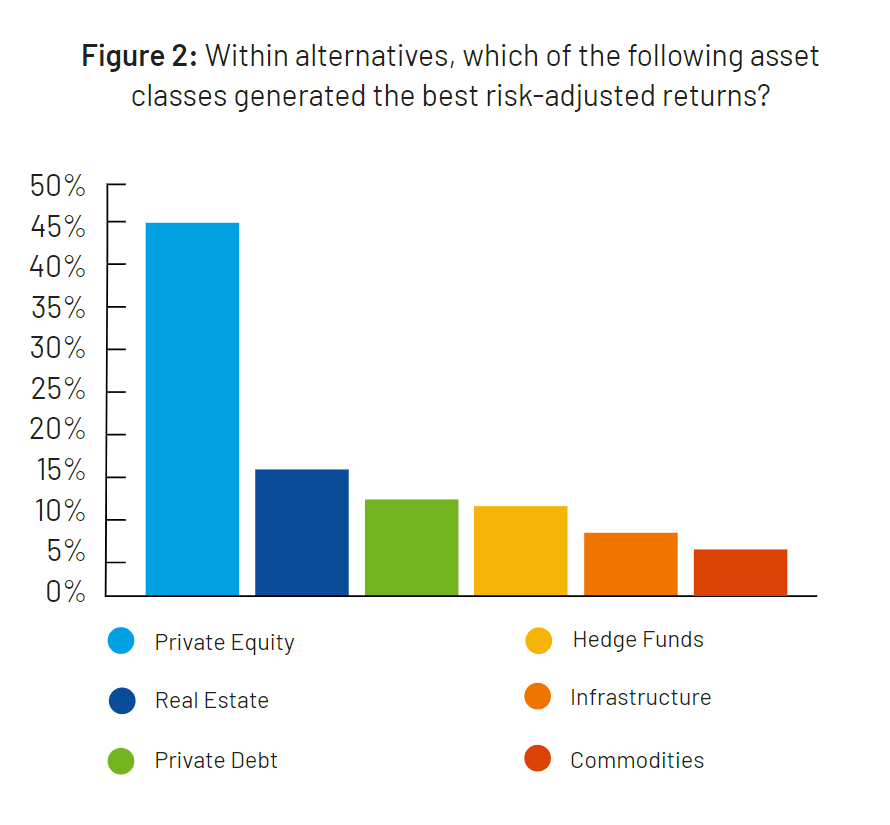 Commenting on the performance of private equity, a spokesperson from a leading U.S. public pension fund says, “With respect to the 10-year economic expansion we’ve witnessed in the U.S., purchase price multiples have been going up, public equities have been going up and it all helps to drive valuations and deal activity. Private equity has performed very well as a result of this. It’s hard to be disappointed.”

As to where LPs would like alternative fund managers to focus their investment activities, there were two clear market sectors that stood out: Technology and Healthcare (see figure 5).

“I think Healthcare is the best sector for equity long/short strategies – there is such a wide range of things going on in that sector from regulatory changes to scientific advances, as well as great short opportunities coming from drugs that lack strong commercial potential. Technology has similar dynamics. Those two sectors are our biggest allocations and will continue to be,” comments a FoHF. 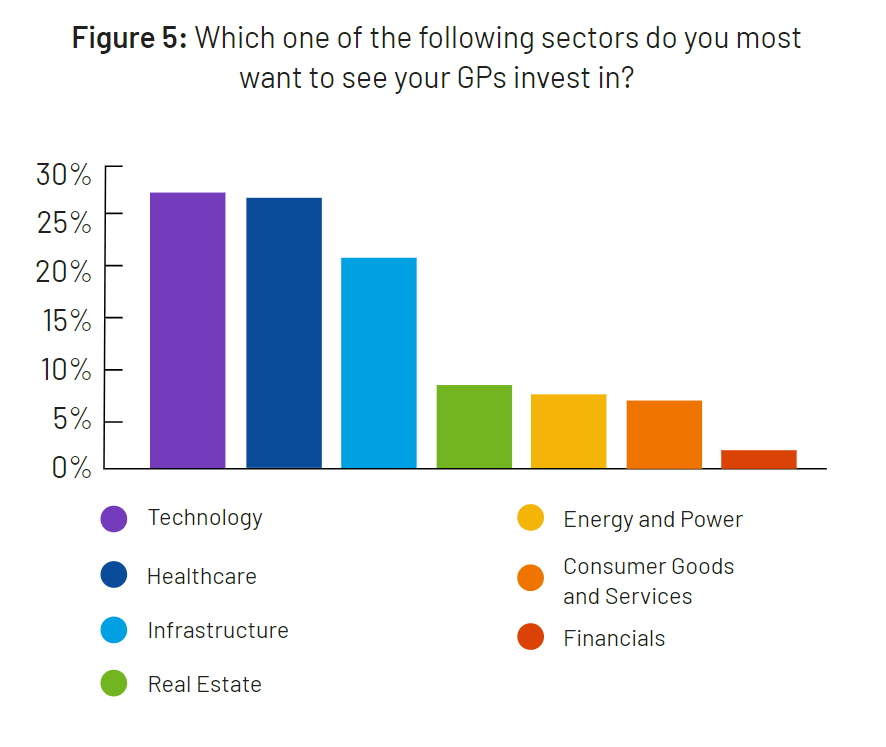 Moreover, Healthcare-focused funds have proven to excel over the above time period, generating an average IRR of 34.4% compared with 19.2% by generalist funds.

“A lot of LPs are playing in the mid-market, as the survey suggests, but because of the dispersion of returns manager selection becomes even more important,” says a pension fund LP.

This year’s survey findings show an even clearer preference for mid-market private equity, with 61% of LPs favoring direct investment into this asset class, while only one in six saying they would focus on core real estate and regional infrastructure investment opportunities.

Expose your QP clients to the same alternative investment opportunities as the most sophisticated institutional investors.