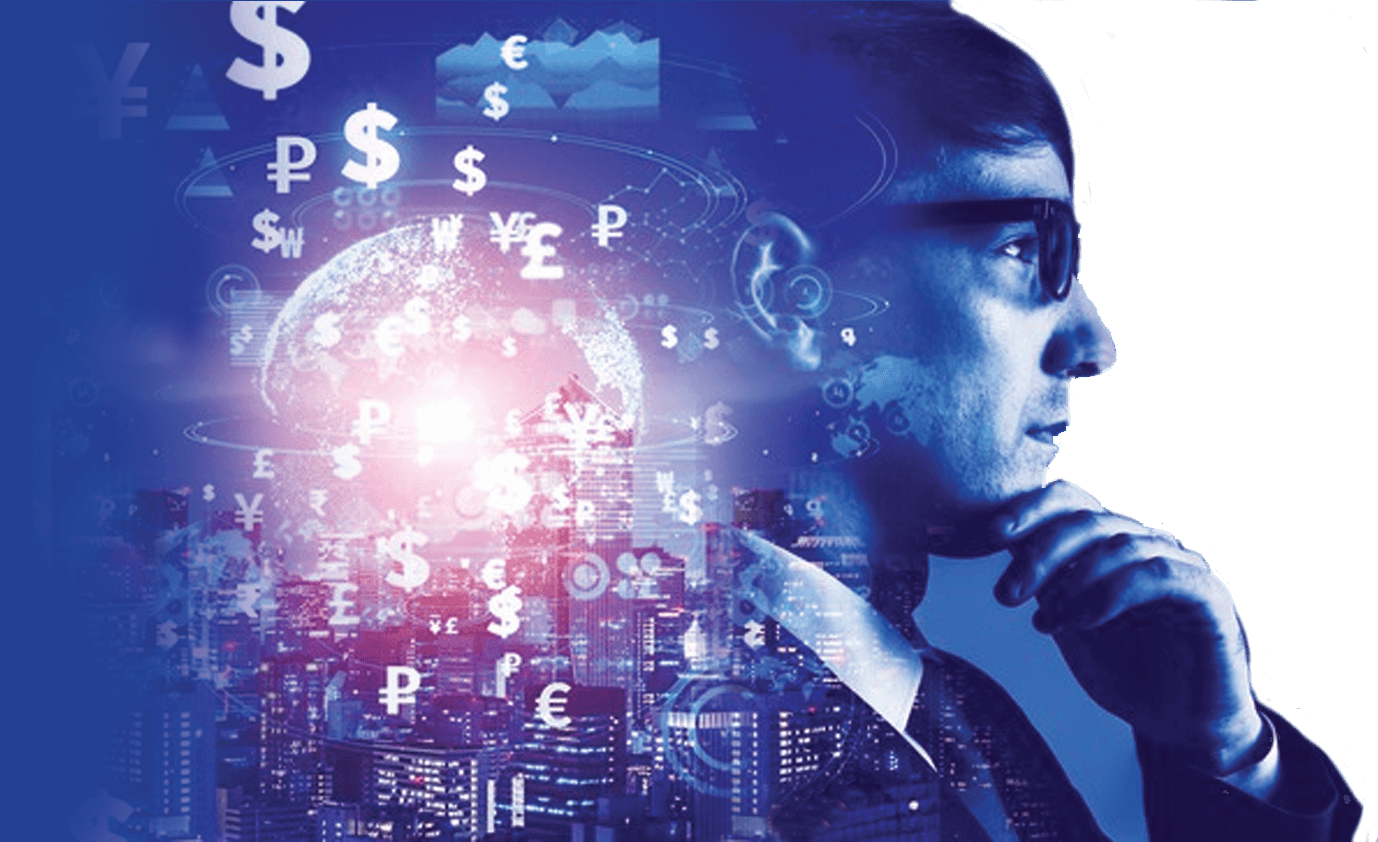 Access these funds for your clients' portfolios with Crystal's turnkey alternative investment platform. 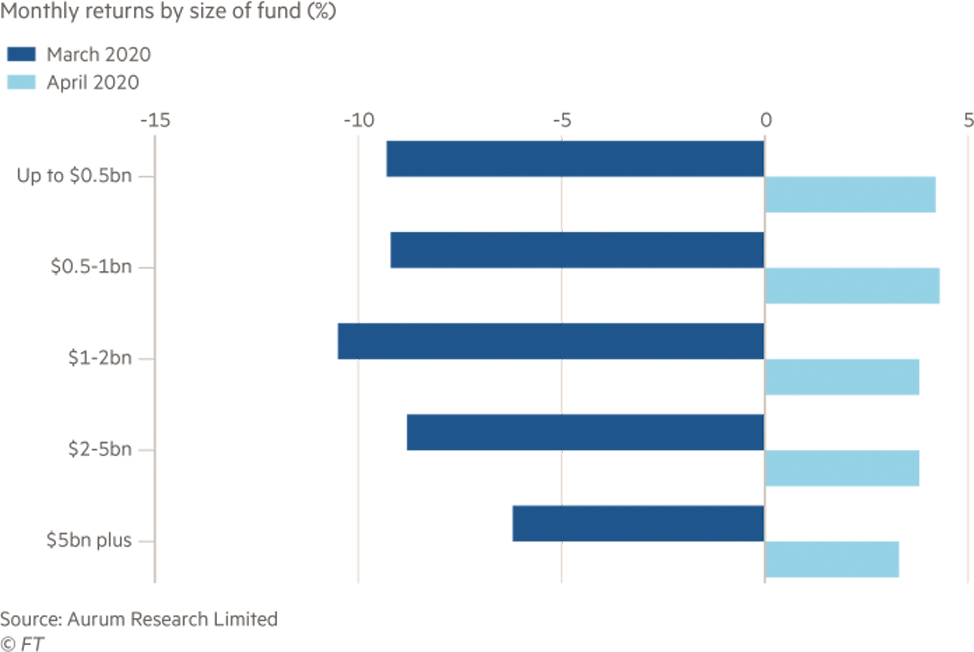 “Large hedge fund managers, with a few exceptions, have managed well through this period of volatility, they've reacted well,” said Danny Caplan, managing director in Citigroup’s prime finance business. He cited managers with years of experience, who tend to run more money, as some of the better performers. In March, for example, hedge funds managing more than $5bn lost 6.2%, according to data from investor Aurum Fund Management. That beat by some margin the performance of funds with $2bn-$5bn, $1bn-$2bn, $500m-$1bn or up to $500m in assets. It meant that over the 12 months to the end of April, generally, the biggest hedge funds were the only one of the five categories to make money.

In Q1 when the Dow Jones Industrial Average lost 23%, the Standard & Poor’s 500 lost 20%, and the average hedge fund lost more than 8%, Balyasny’s Atlas Enhanced fund racked up a 4.66% gain. The fund was up close to 8% through the third week of April, according to people familiar with the performance. That follows a 12% gain in 2019, with negative correlation to the S&P 500.

The recent success for some large funds like Balyasny's Atlas fund during recent market volatility may be due to their size. “We have been able to maintain our performance and manage through this period and outperform — without having to change the DNA or the construct of the firm to do it,” said Scott Schroeder, a founding partner of Balyasny Asset Management. “We didn’t have to suddenly become a beta player or virus expert to make a bet on this.”

Bets on lower interest rates have fuelled profits for hedge fund managers including Andrew Law’s Caxton Associates and former Moore Capital whizz Greg Coffey in a chaotic period for markets. According to an article in the Financial Times published in early March, Mr. Law’s London-based Caxton, one of the world’s oldest and best-known funds, has gained more than 3% in its main Global fund since the start of last week, taking returns this year to 7%. A portfolio run solely by Mr. Law also profited and is up 8 % this year.

Many of the biggest hedge fund names have protected investor capital — and even made money — during the latest downturn. In the first four months of the year, Chicago-based Citadel’s flagship Wellington fund is up 10%, Point72 has gained 1.8% and Millennium is up 3.7%. Meanwhile, ExodusPoint gained about 3%. All of these funds often leverage up their winning bets, meaning their footprint in the market can be many times their asset bases. However, they are also known for the strict risk parameters under which traders operate, and for limiting losses by swiftly cutting risk and dismantling underperforming teams.

For example, during the violent market swings in March triggered by the pandemic, Millennium shut several of its trading units in response to losses, and at least four portfolio managers departed Citadel.

Bill Ackman and his traders spent $27 million buying all the portfolio protection earlier this year, according to an article in Forbes. The hedges were designed to protect Pershing Square against an explosion of risk and volatility if the coronavirus spread. As of the close of March 25th, Pershing Square was up 0.2% for the year, versus the 20%-plus plunge of the S&P 500. His hedges shielded his investors against 50%-plus declines in some of his holdings. As of March 25, 2020, the maneuvering has protected all of the 58% gain Pershing Square reported to its investors in 2019.

“If you look at the platforms, historical performance over 10 or 15 years has been pretty good. Then they hit the turmoil and everyone's OK — that's what institutional investors are looking for,” said Citigroup’s Mr. Caplan. Prime brokers said the pass-through expenses model can help multi-manager platforms retain top talent during tough periods. Funds that charge a conventional fixed management fee may face the headache of how to pay a star trader who has done well when the overall fund has done poorly, as there will be no performance fees to share around. In contrast, the platform model of passing through expenses allows them to reward the traders they most want to keep, even if the fund’s overall returns are poor.

Large hedge funds are also likely to have benefited during this crisis from a phenomenon seen in 2008 — because their business is worth so much to the banks they trade with, lenders are less likely to rein in a fund’s borrowing at short notice, according to Patrick Ghali, co-founder of Sussex Partners, which advises institutions on investing in hedge funds. “Counterparties helped bigger managers more than smaller managers. Having a certain size was helpful,” he said. A prime broker at a large bank said the lender had become increasingly selective among its hedge fund clients. “To get resources in a resource-constrained environment you have to be meaningful,” he said. “We have to be very judicious, and every prime broker is doing this.”

Fundraising in this environment

Underscoring the investor appetite for industry titans over minnows, several big hedge funds — such as Citadel, Millennium, DE Shaw, Baupost and TCI — are raising billions of dollars from investors this year to take advantage of the market dislocations.

D.E. Shaw, one of the world’s biggest hedge funds, has raised $2 billion in commitments after opening its doors to new capital for the first time in seven years. The capital raise is for D.E. Shaw’s $13 billion flagship Composite fund, which fell 0.5% this year through March 20. The fund trades across asset classes, including fixed income, stocks and asset-backed securities.

LMR Partners, Citadel, Baupost Group and Capital Four Management are trying to persuade clients to inject money into their funds. Capula Investment Management has had talks with some investors as it considers raising fresh capital. Several long-biased equity, credit and relative value hedge funds have opened mid-month to tap money from existing clients, UBS Group AG said in a note sent by its prime brokerage unit on Friday. Citadel, with about $30 billion in assets, is raising a new relative value fixed-income fund to target opportunities created by the recent surge in volatility. Coatue Management is gathering money for a long-only fund.

The hedge fund industry is becoming increasingly concentrated in a small number of larger players, as bigger groups outpace some of their supposedly more nimble rivals. 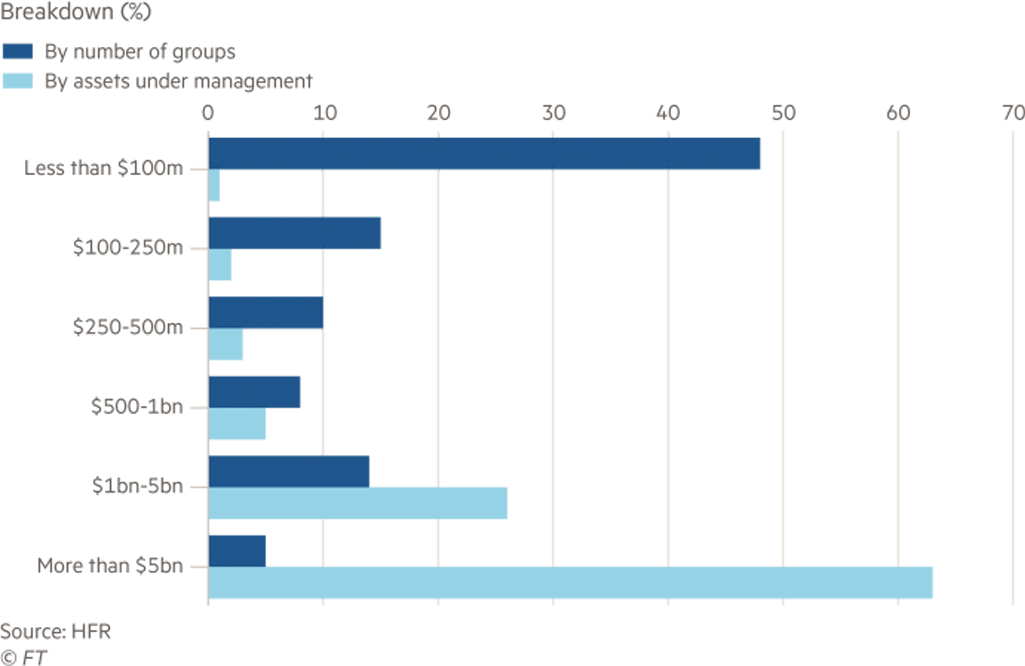 Hedge fund managers with huge asset bases have been slowly growing more dominant for years, as ever-greater demands from cautious institutional investors and higher costs of complying with regulation have squeezed out smaller funds.

Some two-thirds of the industry’s assets are now run by about 5% of the managers, while just under half of the firms are small outfits that oversee under $100m, according to data group HFR.

More than 1,100 launches occurred in 2011, but only 480 last year, the lowest level since 2000, said HFR. Launches are fewer but often bigger. In recent years mega start-ups include ExodusPoint Capital Management, the $8bn launch in 2017 from Millennium alumnus Michael Gelband; and D1 Capital Partners, which was founded by Daniel Sundheim, formerly of Viking Global Investors, and kicked off with $4bn in 2017.

The relative lack of hedge fund launches reflects how traders would prefer to join an established name rather than take the business risk of setting up on their own. The big platforms take care of time-consuming back office and marketing functions, freeing up the traders to focus on navigating the markets.

Institutionalization of the hedge fund industry

Pension funds, endowments, sovereign wealth funds and foundations account for nearly 70% of the investor base for hedge funds, according to the Alternative Investment Management Association.

As part of their own growth and maturation, and in response to greater institutional investor demand, hedge fund managers and firms of all sizes have become more institutionalized in terms of their internal systems, structures and general operational infrastructure. This can be seen in the use of risk management practices and systems, compliance procedures, performance and risk reporting, governance structures and overall operational sophistication.

Institutional investors demand the highest quality operational and risk management systems from the funds they invest in. In response to investor feedback, hedge fund managers have developed sophisticated asset management and trading infrastructures.

These demands have required significant investments by managers in systems, technology and people. However, the benefits to investors and managers outweigh costs. The emphasis by investors and policymakers on transparency and systemic risk analysis will serve to reinforce and continue this infrastructure build.

The institutionalization of the hedge fund industry has been a developing theme for the past 10 plus years and is likely to continue. It will also assist them to meet new regulatory demands.

PitchBook analysts expect entrenched firms to have more success in fundraising, leading to more mega funds. The largest managers will tighten their grip on private capital markets during the coronavirus pandemic, according to PitchBook.

“Covid-19’s impact on in-person due diligence is thwarting fundraising attempts by nearly every GP and further exacerbating the bifurcation between mega-fund managers and everybody else,” Wylie Fernyhough, a senior analyst for private equity at PitchBook, wrote in a new report analyzing fundraising trends. “Business travel and in-person due diligence will likely be inadvisable for LPs for several months, meaning mega-funds and more established firms will continue to assume the lion’s share of capital.”

According to the report, private equity firms Thoma Bravo, Silver Lake Management, New Mountain Capital, and Francisco Partners have either launched mega-buyout funds — defined by PitchBook as vehicles targeting $5 billion or more — or are nearing first closes in spite of the coronavirus pandemic. Smaller firms, meanwhile, “have had to push out fundraising efforts indefinitely,” according to Fernyhough.

“The largest GPs are in high demand and able to secure fresh capital from LPs at a time when many smaller firms are unable to do so,” according to Wylie Fernyhough, Senior Analyst at PitchBook.

In the first quarter, PitchBook said 299 private capital funds closed with a total of $206.3 billion in commitments. This “healthy” fundraising total can be at least partially attributed to funds that completed the bulk of fundraising activities in 2019, according to PitchBook.

Investment pools larger than $5 billion accounted for about a third of the fund closures, PitchBook said.

“Big funds are continuing to close with impressive commitment totals, benefiting both from their established names and the fact that LPs had completed much of their due diligence in 2019,” wrote Hilary Wiek, a senior analyst for fund strategies and performance at PitchBook.

With over 25 years of alternative investment experience, we utilize our expertise and deep network to provide exposure to third-party institutional private equity and hedge funds for your clients' portfolios. Our manager selection process is conflict-free, as we are not compensated by any of the managers in the program.

We seek to identify those with a proven track record, a dedicated risk management process, deep teams and institutional safeguards. The managers on our platform collectively manage over $1 trillion in industry assets.

By working with institutional managers, you receive the benefits of experienced trading teams, robust technical infrastructure, tested disaster and crisis recovery plans, and the ability to trade in several markets.

DISCLAIMER: This industry information and its importance is an opinion only and should not be relied upon as the only important information available. No representation is being made that any investment will or is likely to achieve profits or losses similar to those shown or described. Performance will vary based on many factors, including, but not limited to, investment strategies, taxes, market conditions, and applicable advisory and other fees and expenses related to investing.