The Search for Returns

In a world of negative yields, investors turn to alternative investments in search for returns.

Analysts say the trend toward alternatives is largely the result of relatively lower expectations for Wall Street investments, stocks and bonds. As the trade war between the U.S. and China escalates and economic indicators weaken, investors have fled to other asset classes. Money managers for pensions and endowments are turning to alternative investments to keep up with expectations set years ago with stakeholders. Growth in smaller public companies has been significantly slower than their private-market counterparts. There has also been a contraction in the total number of public companies, partly due to mergers and consolidation and because managers and investors prefer private ownership.

Hedge Funds Thrive in a World of Negative Yields

The growing pool of negative-yielding debt makes this a hostile environment for most bond investors. Yet some hedge funds have still managed to find ways to turn a profit from the advent of sub-zero rates. Concerns over weak global growth and drooping inflation have pushed around $15tn of bonds to trade with negative yields — meaning a buyer is sure to lose money if they hold the bonds to maturity.

Some money managers trading these bonds have nevertheless chalked up big gains for the year. One of the most obvious strategies has involved simply riding the big rally. Yields fall as prices rise; managers who clung on to their holdings as yields tumbled below zero have reaped juicy profits.

Among the biggest winners are computer-driven hedge funds (quant funds) that try to latch on to market trends. While many human traders may question the wisdom of buying or keeping a bond that apparently offers a guaranteed loss, robot traders that monitor price moves have no such qualms.

Meanwhile, Winton Group, one of the world’s biggest hedge funds with around $20bn in assets, has gained 3.5 per cent in its flagship fund this year, helped by bets on futures on German and Japanese bonds.

Nevertheless, some high-profile human traders have done well from the fixed-income frenzy this year. Brevan Howard, headed by billionaire Alan Howard, has gained around 8.5 per cent in its main fund, while Caxton Associates is up 16.3 per cent and Greg Coffey’s Kirkoswald Capital Partners is up around 18 per cent, all helped by bets on falling yields.

For starters, fund managers based outside the eurozone can profit from buying Europe’s negative-yielding government debt thanks to an uplift from hedging the currency. That is because such hedges are based on the relative levels of short-term interest rates. These are much higher in the US than in the euro zone, meaning dollar-based investors are effectively paid to hedge their euro exposure back into dollars. For instance, a two-year German Bund currently yields around minus 0.88 per cent. However, after hedging the currency, this becomes a positive yield of around 1.9 per cent for dollar-based investors. For a US-based investor, this is better than buying a two-year Treasury.

Managers can also earn money from the steepness of yield curves. While German government bonds up to 30 years in maturity are now offering negative yields, the curve is fairly steep. That means a likely rise in price for an investor who buys a 10-year future, then waits until it becomes a nine-year, and then sells it and buys a 10-year again, pocketing a small gain.

For long-term investors, the solution lies in having a well-diversified portfolio, says Fidelity’s Mr Stevenson. He recommends using multi-asset funds as a low-cost way of spreading risk across asset classes, sectors and regions. “Because we do not have a crystal ball, we can only seek to minimize the ups and downs of our investments by putting our eggs in a variety of baskets.” Adrian Lowcock, head of personal investing at Willis Owen, says absolute return funds are another tool that investors can use to hedge risk. These funds are designed not to lose as much as equities when markets turn, at the cost of not performing as strongly in the good times.

Money managers for pensions and endowments are turning to alternative investments — private equity, venture capital or hedge funds – to “keep up with expectations that they set years ago with their stakeholders,” according to McKinsey Partner Bryce Klempner.

“The incentives for early exposure to rapidly growing, mature companies are still intact,” PitchBook senior manager Garrett James Black said in the firm’s 2019 “Unicorn Report” . “With those imperatives in place and current market conditions — despite concern about a supposed imminent recession— looking to persist, unicorns aren’t going away anytime soon.”

In a world where big institutional investors find themselves starved for returns, it’s not surprising that they have steadily increased allocations to private markets and you’ve seen capital continuing to flow into the asset class. Private equity has, on average, managed to outperform public markets over the last couple of decades.

A $53 Billion Fund Is Looking for Illiquid Assets

One of the Nordic region’s largest pension funds is reducing its stock of government bonds for alternative assets, which could include real estate and private equity, in the hope of generating higher returns. A fund for the retired clergy in England is shifting allocations to private credit. A fund for U.K. railway workers, meanwhile, is looking to boost exposure to private debt to as much as 40% within a private-investment strategy totaling £4.5 billion ($5.5 billion) between two funds.

Ilmarinen Mutual Pension Insurance Co., which oversees about 48 billion euros ($53 billion) from its office in Helsinki, is trying to figure out how best to operate in a world in which large chunks of the debt market trade at negative yields.

Mikko Mursula, the chief investment officer at Ilmarinen, says that “the answer is, you need to be innovative and able to accept more, in some cases a lot more, illiquidity in your portfolio than before.”

Mursula says it’s now “unrealistic” to expect good returns in the fixed-income market. So Ilmarinen has been relying more on alternative assets to boost its performance. Mursula says the best opportunities are in real estate, as well as in the least liquid corners of the fixed-income market, such as private debt. He’s also looking at private equity.

Within the private debt markets, there are products and managers, and investment opportunities that’ll provide you a 2%-3% return,” Mursula said. “Then if you go to the riskier part of the market we are starting to see return levels of 10%-12%.’’

Growth in smaller public companies has been significantly slower than their private-market counterparts. PitchBook looked at the valuations of late-stage, Series D funded companies compared to the small-cap benchmark Russell 2000. That index is in correction territory, trading nearly 14% below its 52-week intraday high in August of 2018. The S&P 500 is off by 4% from its high. Meanwhile, there has also been a contraction in the total number of public companies.

Foreign investors are also looking for early entrance into quickly growing tech companies, which in the case of Uber and WeWork, stayed off of public stock exchanges for a decade. Last year, venture capital deals that included “tourist” investors soared to more than $45 billion over 102 investments. Halfway through 2019, the deal total was at 53.

U.S. institutions managing trillions of dollars in retirement savings -- including the California Public Employees’ Retirement System -- have been ratcheting down return expectations. Japan’s Government Pension Investment Fund, the world’s largest, has warned that money managers risk losses across asset classes. In Europe, pension funds may be forced to cut benefits in part thanks to the decline in rates.

Now, negative yields on over a quarter of investment-grade bonds -- with more monetary easing to come -- are increasing the urgency for portfolio managers to find new sources of returns.

Source: CNBC, Aug 21, 2019 - Surge in corporate debt with negative yields poses risk ‘unlike anything’ investors have ever seen 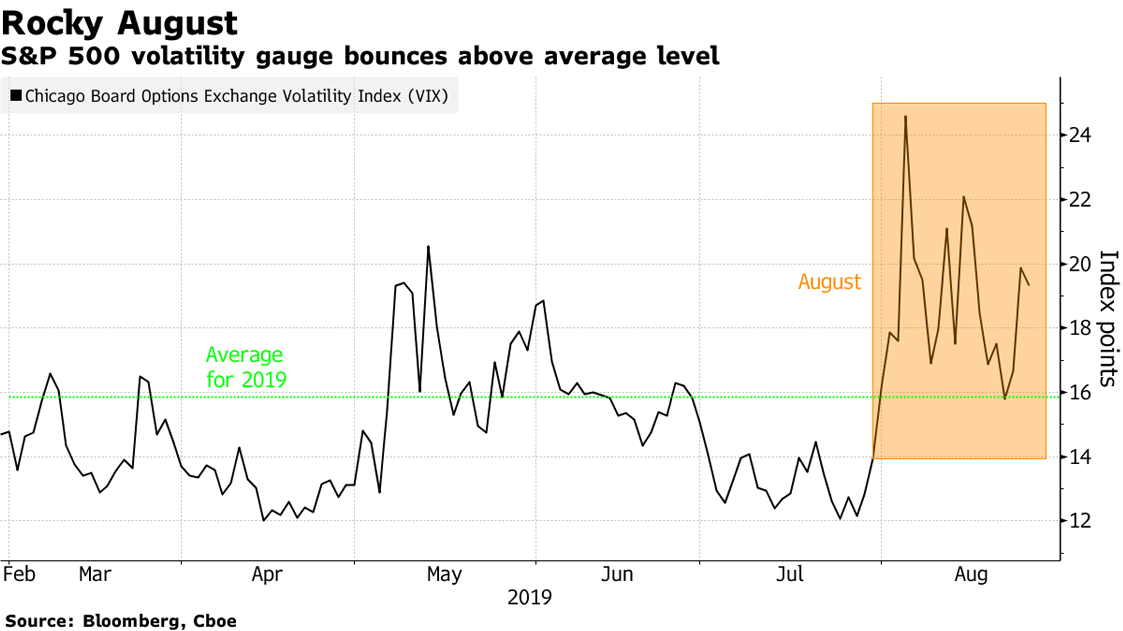