The EV market is seeing improving technology, strong regulatory tailwinds, and ongoing investment into electrification by incumbent automakers. PitchBook expects the EV market size to expand from $102.3 billion in 2020 to $436.6 billion in 2025. Government commitments to phasing out gasoline and diesel vehicle sales will play a key role in the adoption of electric cars. GM recently announced plans to offer electric vehicles exclusively by 2035.

It has become increasingly clear that the next era of the automotive industry will most likely be electric. The technology has matured, and now electric cars generally offer better performance, design, and safety than gas-powered vehicles. Ongoing investment into improving the convenience and affordability of electric vehicle ownership could expand the market fourfold over the next five years.

Regulation is also a key factor in the electrification story; China, Denmark, France, India, Israel, Norway, the UK, and Sweden have made soft commitments to phasing out new gasoline and diesel vehicle sales within the 2030-2040 timeframe. Some municipalities are moving more quickly, with cities including Amsterdam, Brussels, Los Angeles, London, Madrid, Paris, Rome, and Vancouver making soft commitments to phase out gasoline and diesel vehicles by 2025-2030. In the US, California and Massachusetts have announced plans to ban the sale of gas-powered vehicles by 2035. These measures set an important precedent, and PitchBook believes that a nationwide mandate to ban all sales of new gas-powered vehicles by 2035 could be in the cards for the US.

Many emerging electric vehicle startups are on course to enter the automotive market in the next few years and significantly disrupt the incumbent automakers. Recently, several of these new entrants have announced plans to debut on public markets via SPAC reverse mergers. Because they offer quicker time-to-market and less scrutiny, SPACs are an attractive listing option for electric vehicle companies and, more broadly, startups that are highly capital-intensive and in the pre- to early revenue stages.

These deals enable companies to mitigate market volatility and strike while the iron is hot. Investor enthusiasm for electrification is strong right now, and it is an opportune time for electric vehicle companies to raise capital from public market investors, as valuations in the space are high. Publicly traded electric vehicle stocks have seen a strong runup in the last few months. However, these favorable conditions may not last, and market volatility could return unexpectedly. Hence, according to PitchBook, electric vehicle management teams may view a traditional IPO as too lengthy of a process.

These transactions also enable companies to face a lower level of scrutiny relative to what is typically faced by companies in the lead up to a traditional IPO. Most electric vehicle startups that are currently raising capital will not generate any revenue for at least a year. Additionally, each company will require hundreds of millions of dollars in capital to build out manufacturing facilities and scale production. As a result, it will most likely be several years before these companies reach profitability. While such early-stage, high-risk companies would probably struggle to find buyers in a traditional IPO, a SPAC merger provides a means to raise money via a public vehicle that is already listed on an exchange. Since this route functions more like a traditional acquisition, the private company primarily negotiates with just one party rather than a host of investors on a road show. While some risks do exist with this process, a SPAC merger can provide greater flexibility for companies to share their vision by presenting financial projections without the burden of certain regulatory requirements as in a traditional IPO.

The number of EV SPACs may rise in the years to come as the world pivots to full EV adoption and looks for ways to raise money to fund the transition, according to Bank of America.

"The auto industry is reaching an inflection point for electric vehicles, but funding this revolution is a tremendous hurdle," a team of BofA strategists led by John Murphy said.

BofA estimates that the transition towards 100% electrification could require over $2.5 trillion of investment around the globe over the next decade.

2020 was a banner year for the amount of EV SPACs in the market. Fisker, Lordstown Motors, Canoo, and XL Fleet Corp were just some of the companies that went public via a reverse merger with an EV SPAC in 2020. According to BofA, over $6 billion has been raised via EV SPACs so far.

Although that amount is nowhere near the $2.5 trillion capital goal, the recent EV SPAC boom indicates that there is a lot of external capital waiting to be deployed for companies participating in the "electrification revolution," said BofA.

"With this in mind, we would expect the EV SPAC boom and capital raises for newer EV companies to continue in 2021+" BofA added.

The shift toward electrification raises the question as to whether incumbent auto equipment manufacturers or new entrants will be seeing the biggest investments in the race to electrify. Bank of America says newer EV entrants, and those who could use SPAC money to raise capital, may have an advantage.

"A key competitive advantage currently being afforded to the newer EV entrants versus the incumbent OEMs/suppliers is unfettered access to low-cost capital to fund product development, capacity installation/expansion, and other business efforts, as illustrated by the SPAC boom and TSLA's constant capital raises," said the strategists.

Other sources of capital needed to meet the $2.5 trillion goal will include internal funding within existing auto suppliers, other forms of external capital raising outside of SPACs, and government funding, said BofA.

For example, the proposed Green New Deal in the US could be a harbinger of possible support to come, though the $2.5 trillion estimate is an approximation for capital required around the globe, not just in the US, the strategists said.

Mobility SPACs encompass the following segments: Electric Vehicles, Autonomous Vehicles and Online Auto Commerce. In 2020, 26 mobility tech companies merged with SPACs (or entered the process of doing so), representing a combined valuation of over $100 billion and generating an average return of 63.8% since their announcement dates.

PitchBook created a Mobility SPAC Index by equally weighting 26 mobility tech companies that have gone public through a reverse merger with a SPAC. In the latter half of 2020, the Mobility SPAC Index generated a return of 77.7%, well above the S&P 500 total return and Nasdaq 100 total return of 22.2% and 27.4%, respectively. PitchBook believes these strong exit outcomes demonstrate that successful exits are possible for venture-backed startups and will serve to attract more early-stage capital to the mobility tech industry. 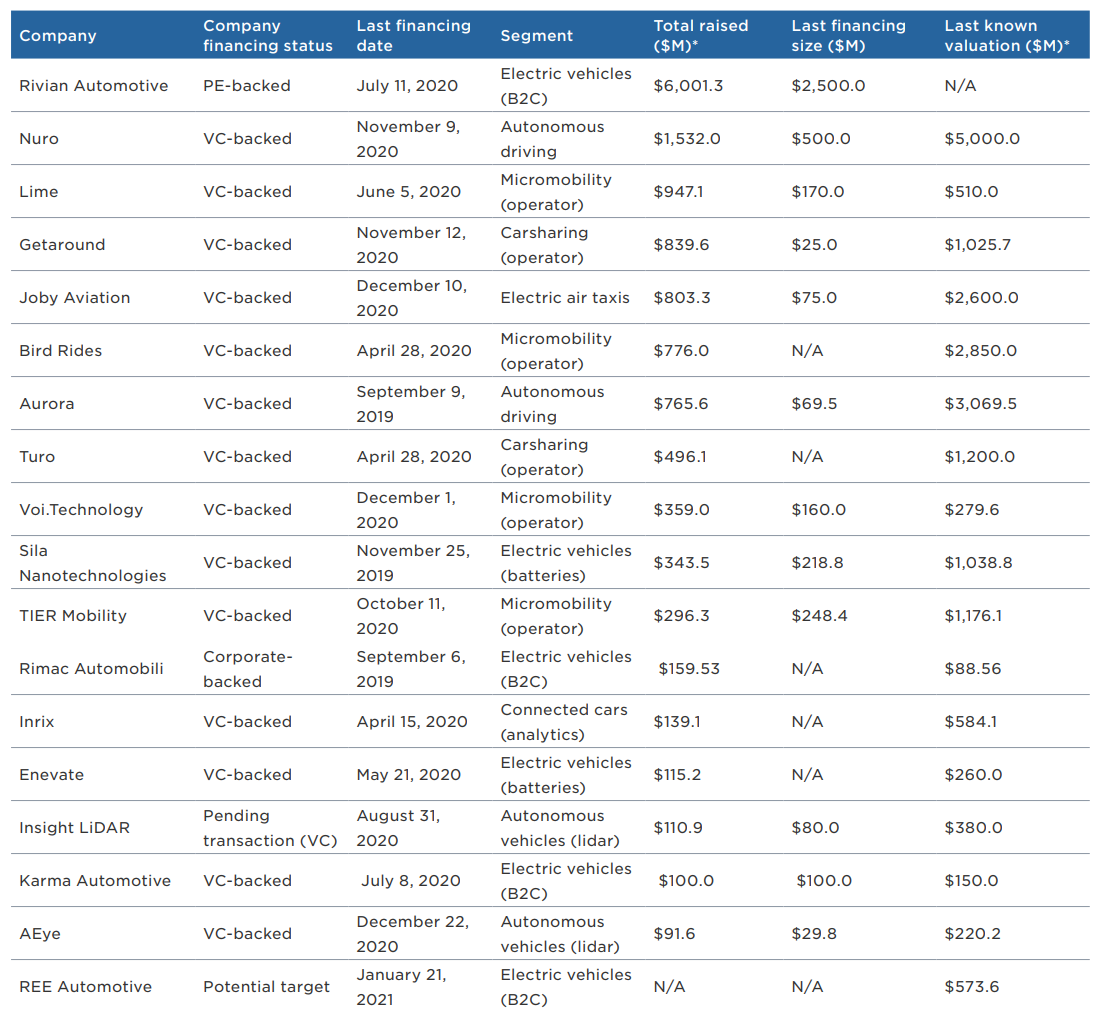 Overheated valuations - Valuations in this space (especially for electric vehicle companies) have run up significantly. Tesla’s (NASDAQ: TSLA) market capitalization has soared to over $800.0 billion after receiving a surge of orders and achieving profitability and inclusion in the S&P 500; solid state battery tech company QuantumScape obtained a valuation of $19.3 billion despite not being expected to generate any meaningful revenue until 2025. Most notably, hydrogen-electric trucking company Nikola has maintained a valuation of more than $6.5 billion despite multiple allegations of fraud and subsequent investigations by the US Securities and Exchange Commission (SEC) and the US Department of Justice (DOJ), the resignation of its founder Trevor Milton, the scaling down or cancellation of partnerships with GM and Republic Services, little substantial proprietary technology, significant hurdles in developing hydrogen fuel cell technology, and a relatively untested brand. While PitchBook is optimistic about electric vehicle adoption in the long term, it believes a major stock price decline in a high-profile name such as Tesla or Nikola could translate to a pullback in the broader electric vehicle and mobility SPAC ecosystem.

Reputational risk - Additionally, PitchBook believes mobility companies going public through a SPAC could face some reputational risk. Historically, SPAC IPOs have been regarded as a back-door route to liquidity, favored by companies with lackluster financials. While this mindset is experiencing a shift, PitchBook has heard, anecdotally, about non-investor corporate partners maintaining a degree of skepticism toward SPACs as a route to liquidity. This may be a risk to consider for mobility companies actively seeking new partnerships or customers.