Understanding the SPAC Market and Why It’s Booming Right Now

Learn which institutional hedge funds on our platform invest in and/or sponsor SPACs.

WHAT IS A SPAC?

Interest in SPACs — Special Purpose Acquisition Companies, or companies that go public in order to acquire private firms — skyrocketed in 2020. A SPAC is basically a publicly traded firm that has no operations, no assets — other than a war chest of cash — and just one stated business plan: to eventually buy another company.

A SPAC is generally formed by a group of investors, called sponsors, with a strong background in a particular industry or business sector. They raise funds from other investors in a traditional IPO, and use the money to acquire an existing, privately held company.

When they launch the SPAC, the sponsors generally either don't have a specific target in mind, or they're not ready to name it in order to avoid the extensive paperwork and disclosures required by the Securities and Exchange Commission (SEC).

The early-bird underwriters and institutional investors, and the individual investors who generally come in later, typically have no idea exactly how the sponsors will spend the money. So, early investors are basically relying on the sponsors' reputation in the hope of snagging a good investment. Ideally, a SPAC provides the opportunity to invest in a good management team or in a good entrepreneur where there is a potential for a profitable deal, that increases the value of the investment.

But the investors have to be prepared to wait. Even after a SPAC goes public, it can take up to two years to pick and announce the target company it wants to acquire, or, technically speaking, merge with (the corporate charter specifies the exact time frame, per SEC regulations). If it doesn't, the SPAC is liquidated, and funds it's raised are supposed to be returned to investors.

Over the last 2 years, companies like Draft Kings and Virgin Galactic have all gone public via mergers with SPACs. Private companies are increasingly utilizing SPACs to bypass the traditional IPO process and gain a public listing.

U.S.-listed SPACs raised $82 billion in 2020, a more-than-sixfold increase from the year before and a figure greater than all of the money previously raised, according to Dealogic.

In addition to "ordinary" IPOs, 2020 saw some 219 separate SPACs formed, according to a comment on the SPAC market made by Goldman Sachs. While not all of these SPACs have succeeded in finding private companies to acquire and bring public yet, at least 71 have. This means investors now have at least six dozen more companies to choose from than they did before the SPAC craze began -- and by the time all of 2020's SPACs do find their targets, there could be as many as 18 dozen new companies to choose from.

Note: Based on U.S. -listed IPOs

Why Does the SPAC Market Appeal to Investors? SPACs Can Give Early Investors Steady Returns with Little Risk 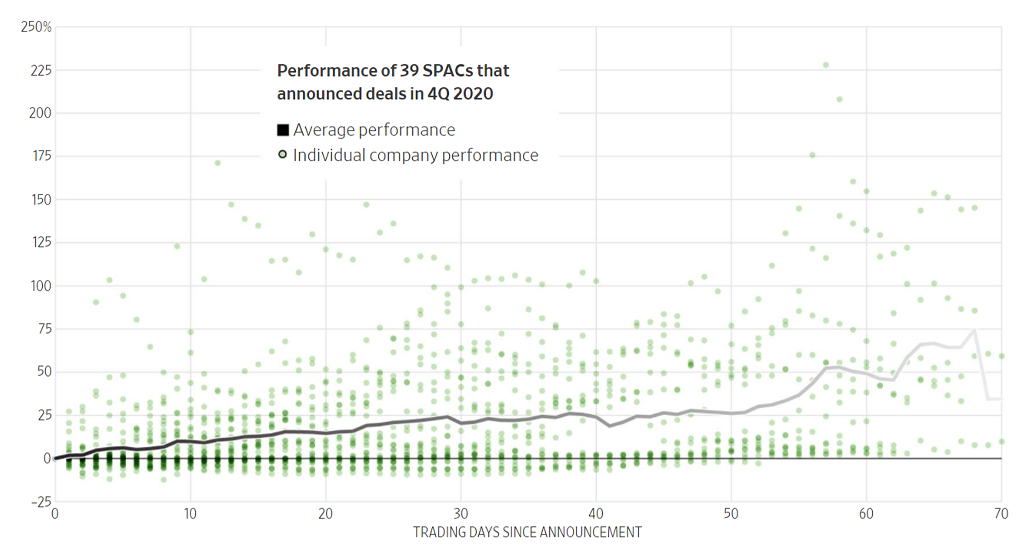 NOTE: Data as of Jan, 12; the number of companies in the average decreases as the trading days increase Source: Dow Jones Market Data

Ultralow interest rates make SPACs more appealing to investors by reducing the returns they can expect from safe assets like government bonds, pushing them toward alternatives. SPACs raise money in order to carry out an acquisition. Investors are drawn to SPACs because if they believe the deal is unfavorable, they have the option to redeem their shares, plus interest, before the deal goes through. And SPACs make it easier for startups to tout their long-term growth projections, due to regulatory differences between SPACs and traditional IPOs.

One example came Jan. 7, 2021, when shares of the venture capitalist Chamath Palihapitiya’s Social Capital Hedosophia Holdings Corp. V advanced 63% after it said it is combining with Social Finance Inc. to take the financial-technology company public.

Here is how the economics of the trade typically work from a hedge fund investor’s point of view: Hedge funds give the SPAC money for up to two years while it looks for a merger target. In return, they obtain a unique right to withdraw their investment before a deal goes through that helps minimize any loss on the trade. At the same time, the potential return for early investors is huge if the SPAC shares rise because they also initially receive shares and warrants giving them the right to buy more shares at a specified price in the future. As the vehicles become more popular, the hedge funds that invest in them early on, such as Magnetar Capital, Glazer Capital and Israel Englander’s Millennium Management, can earn lofty returns without much risk.

SPACs are often volatile around announcements, but those that unveiled deals in the last three months of 2020 climbed 5.4% on average on the day of those announcements and traded 16% higher one month later, according to a Dow Jones Market Data analysis of trading in 39 such companies. The last 16 SPACs that have one month of trading following a deal announcement have all risen in that span.

Even if SPAC shares fall, early investors are protected by the right to withdraw before the merger. Throughout the whole process, they can sell warrants or hold on to them. When SPAC shares surge, warrants grow more valuable. Some analysts say that this makes the funds’ trade a rare example of a mainstream investment that has limited pitfalls. However, the gains for early investors often come at the expense of other stakeholders, particularly those who take on more risk when buying shares later in the process after a deal is announced or goes through.

“It’s a free lunch—there’s no way around it,” said Michael Ohlrogge, an assistant professor of law at New York University.

Ohlrogge and Stanford Law School’s Michael Klausner studied SPACs that merged between January 2019 and June 2020 and found that hedge funds nearly always sold their shares or withdrew before deal completion. The average annualized return for those that withdrew was 11.6%.

WHO ARE SOME OF THE BIG SPAC INVESTORS?

Number of investors with $100 million or more in SPAC holdings, by quarter 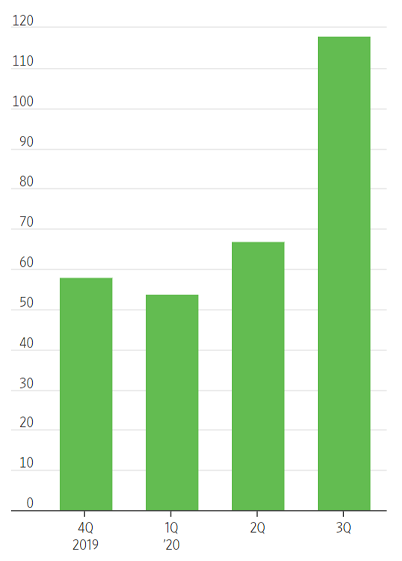 Note: Data based on disclosure in 13F filings. 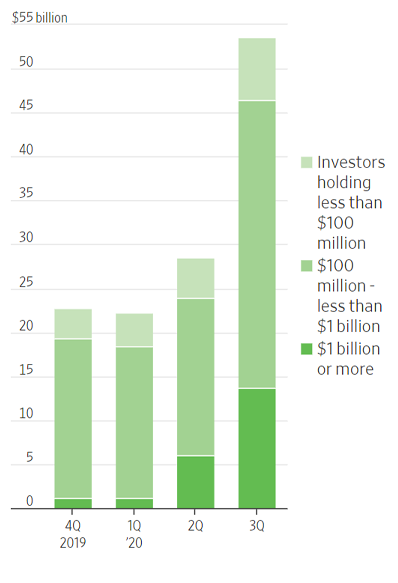 Eight investors had more than $1 billion invested in SPACs at the end of the third quarter of last year, led by Millennium, Magnetar and Glazer, according to regulatory filings compiled by data provider SPAC Research. Polar Asset Management and Linden Advisors round out the top five. An additional 51 investors who had less than $100 million in SPAC holdings in the second quarter of last year held that amount or more by September.

Value of SPAC investments by hedge fund as of Sept. 30

Note: Based on analysis of 13F filings

According to Gil Ottensoser, head of SPAC Banking and Capital Markets at BTIG, “SPACs bring many advantages to the capital raising process,” including:

Transparency - When announcing a company they are seeking to buy, SPACs must file an S-4 that contains much of the same disclosure and risk outlines that are in the S-1 that an IPO must file.

An easy exit - Investors unhappy with the target acquisition can get out by selling their shares before the acquisition is finalized. 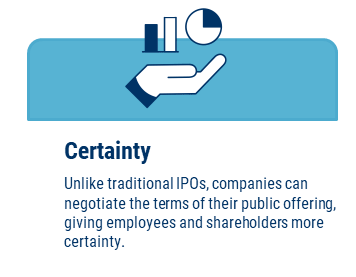 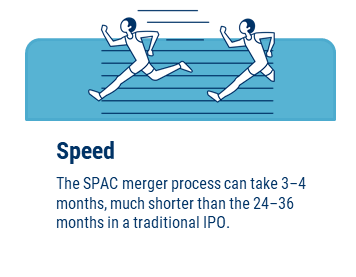 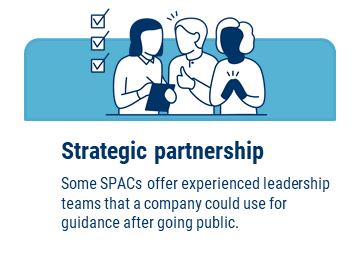 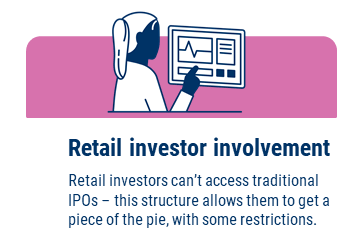 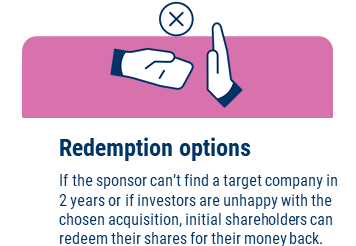 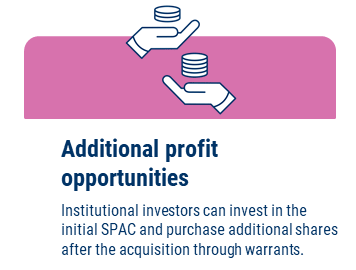 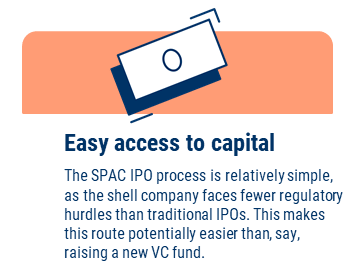 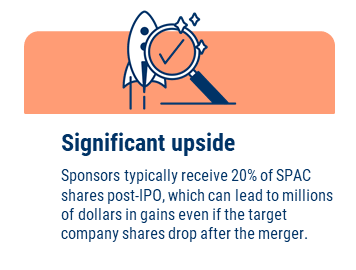 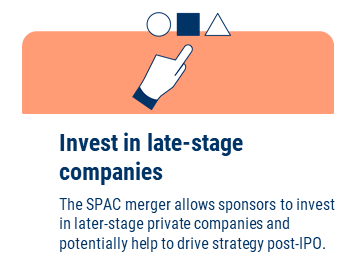 Uncertain investment - SPAC investors usually don't know how their money will be used — what the SPAC's target company is (often the sponsors don't know either). So, the deal's impossible to evaluate.

Lag time - There can be a long lag between the time investors pump money into a SPAC and when it actually buys up a company and starts operations. Your money may sit for up to two years in an escrow account. If no acquisition happens, your funds are returned, but idling capital for that long may be painful.

Sponsor Compensation - A large criticism of SPACs is that they generously compensate the sponsors who take very little risk relative to the payout earned in the transaction.

Mixed track record - In a July 2020 report, Goldman Sachs analyzed the performance of 56 SPACs — primarily in the technology, industrials, energy, and financial segments — that "merged" with their target companies beginning in January 2018. "During the one-month and three-month periods following the acquisition announcement, the average SPAC outperformed the S&P 500 by 1 percentage point (pp) and 11 pp, respectively, and beat the Russell 2000 by 6 pp and 15 pp, respectively," the report notes. "However, the average SPAC underperformed both indexes during the 3, 6, and 12-months after the merger completion."

Source: Business Insider. Oct, 2020. “A SPAC is a high-risk but potentially profitable way to get in on the ground floor of a new stock — here's everything investors need to know.”