Navigate the
with Institutional

What is the J-Curve in private equity?

What is the J-Curve in private equity investing?

When a private equity commitment is made, the value of the commitment typically goes down during the early life of the fund. In the context of a graph, if the vertical axis represents the rate of return, typically expressed as an Internal Rate of Return (IRR) in private equity, and the horizontal axis represents time, the graph line curves down and to the right until the investment stabilizes at which point the line starts moving quickly up and to the right as the investment starts to perform and show profitability through time. The graph below is a model illustration of the J-Curve. 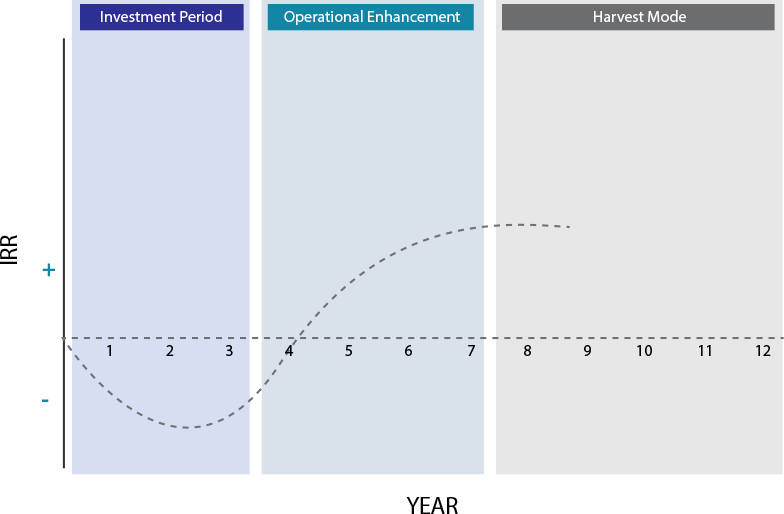 For Illustrative Purposes Only.

The J-Curve within the context of a private equity fund

In the early years of a private equity fund, during what is known as the “Investment Period”, the investment manager works to source companies to acquire for the fund.

After the fund makes acquisitions, their management teams work to add value to the acquired businesses by implementing new business plans focused on increasing revenues and margins. It can take months or years for the effects of the business plan on the portfolio companies to be reflected in valuations. The reason the J-Curve exists is because investment managers charge fees on committed capital prior to making any investments. Furthermore, investments are typically held at cost in the early years of the fund (prior to accounting for fees), as the manager needs time to implement their business plan.

In the middle and later years of a fund’s life the manager will begin to mark up its portfolio investments as their business plans bear fruit. As these portfolio company mark ups begin to reverse the initial markdowns, the fund's overall performance should shift from negative to positive as the J-Curve is achieved.

Factors affecting the shape of a J-Curve

Not all J-Curves are identical. The downward curve of the J can be long, short, shallow, or deep. The following are several factors that determine the specific shape of an asset's J-Curve:

Market Conditions & Private Market "Beta" – During the life of a private equity fund, the private companies owned by the fund are typically evaluated quarterly. There are three primary inputs when evaluating a Private Company:

In essence if a sector gets hot in the public markets or trades aggressively downward, this input into private companies can have an early effect on valuations and can serve to reduce or exaggerate the effect of the J-Curve early in the life of a fund. Similarly, if cash flows are disrupted or greatly increased, for example a large client is won or lost, a similar affect can take place to the J-Curve. Lastly, if a similar company in the same sector sells or exits via IPO, an immediate effect can occur to the J-Curve. As it relates to a private equity fund, the more sector focused the fund is, for example an Enterprise Software focused fund, potentially the more sensitive the investments’ J-Curve shape will be to private market beta, due to the fact that all portfolio companies within the fund will be affected at the same time and by the same sector inputs from these valuation metrics.

Manager skill – The skill of the manager can also affect the shape of the J-Curve. If the manager can source companies where they have identified immediate value to unlock, the J-Curve can be altered significantly. For example, if a private company also owns a lot of its own real estate, a sale leaseback, shortly after acquisition, of some or all of the company’s real estate portfolio could greatly shorten the J-Curve.

How to mitigate the J-Curve

Institutional Managers Matter - Subscription lines of Credit – Proven institutional private equity managers, who have demonstrated the ability to meet fundraising objectives consistently are able to utilize Subscription or Commitment Lines of Credit which is a loan against LP commitments/subscriptions within a fundraise. This enables the managers to quickly close on investment opportunities prior to calling investor capital. In many instances, by the time the manager calls capital for a fund’s capital raise, private companies have already been acquired via the Subscription Line and value is already being unlocked which mitigates the downward curve of the J-Curve, making it more shallow and shorter. In other words, the manager is using bank financing to make opportunistic acquisitions for a fund prior to calling investor or LP capital.

Laddered consistently and periodically over 5 years (vintage diversification), a systematically designed PE portfolio should produce a staggered series of consistent cash flows and liquidity events for an investor, based on the assumptions* below. 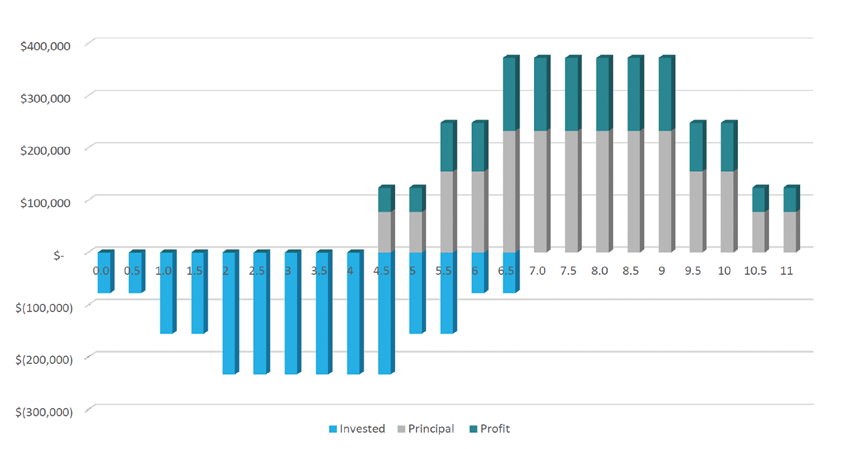 The cashflows in this graph are based on several assumptions, are for illustrative purposes only and cannot be relied upon. The timing and amounts of actual cash flows can vary widely from this illustration and there is no guarantee of performance results.
*The assumptions are 1) $250K is invested every 6 months over 5 years in a new fund 2) each fund calls 1/3 of committed capital per year 3) the average weighted life of an invested dollar is 4.5 years 4) a 1.6 net MOIC was the assumed growth of each invested dollar.

For financial advisors only.