Which managers and strategies are positioning themselves to take advantage of this market dislocation?

What is distressed debt?

Distressed debt describes the borrowings of companies that are perceived to be under significant financial pressure, and often suggests there’s considerable risk that the debtholders won’t get paid everything they’re owed.

As a global recession looms and businesses remain under forced closures, more issuers are likely to end up in similarly dire situations.

The amount of distressed debt in the U.S. has quadrupled in less than a week to nearly $1 trillion, reaching levels not seen since 2008 as the collapse of oil prices and fallout from the coronavirus shutters entire industries across the globe.

In total, the tally has ballooned to $934 billion of U.S. corporate bonds that yield at least 10 percentage points above Treasuries and loans that trade for less than 80 cents on the dollar, according to data compiled by Bloomberg. That’s nearly double the amount from less than a week ago. The total is probably even higher, because the calculation excludes debt of small-to-medium sized companies whose loans trade rarely, if at all.

The coronavirus pandemic has caused the worst sell-off since the global financial crisis and deepened stress in credit markets. Driven by some of the lowest oil prices since the early 2000s, the amount of distressed bonds has surged to the highest level since April 2009.

Most of the distressed debt outstanding stems from U.S. energy companies battered by less travel demand and an all-out price war between Saudi Arabia and Russia. The capital-intensive industry, which financed its shale production largely through debt, suddenly faces the prospect of deeper losses after oil plunged below $20 a barrel. Last month, it traded above $50.

The amount of distressed debt tied to the oil and gas sector stands at over $161 billion, up from $128 billion a week ago. One of the biggest casualties has been Occidental Petroleum Corp., which has seen its funding costs skyrocket and its credit rating cut to make it the biggest fallen angel in the current downgrade cycle. Oxy’s bonds led the list of high-yield losers on Wednesday, with four of its issues among the top 10 decliners.

Energy isn’t alone. Every sector except utilities is under stress, with distressed ratios growing by double or triple digits. Telecommunications, retail, entertainment and healthcare industries make up the bulk of distressed debt. Retailers such as Neiman Marcus Group Inc. and theater chains such as AMC Entertainment Holdings Inc. have been hit hard as companies are forced to close and customers are told to stay home.

Distress in the automotive industry also jumped as consumers decide to cancel travel and stay put. Even investment-grade giants are at risk. Ford Motor Co. now makes up one of the largest issuers with debt tumbling to distressed levels, with a dozen issues hovering near or below 75 cents on the dollar. 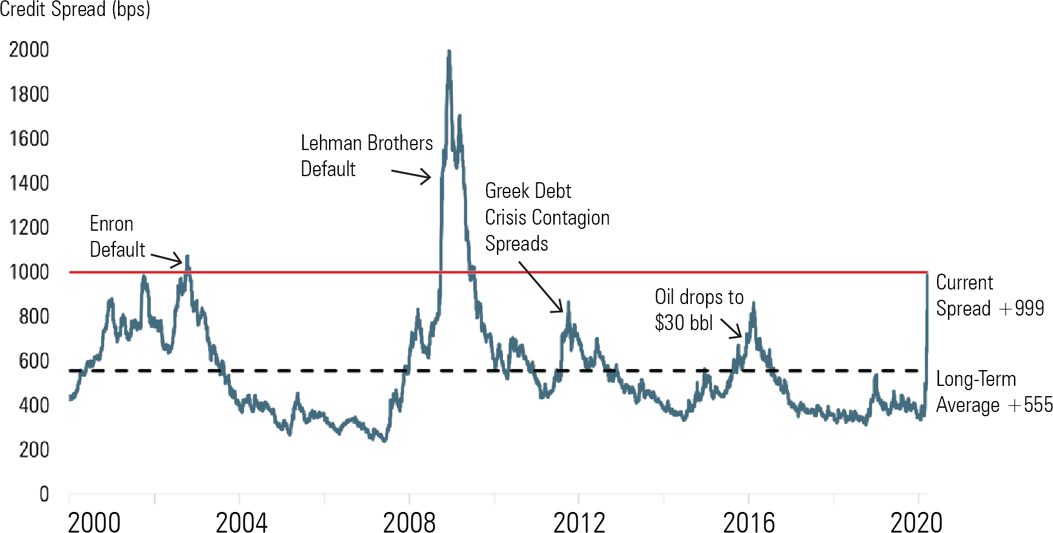 Investors' strong appetite for private debt funds has left managers sitting on about $273 billion of dry powder as of June 30, 2019 - according to PitchBook data. Around $66 billion of that capital is held by managers focused on distressed debt—a class of riskier investments in troubled companies with the potential to offer bigger returns—and they may now have a juicy opportunity to unleash that backlog of dry powder. 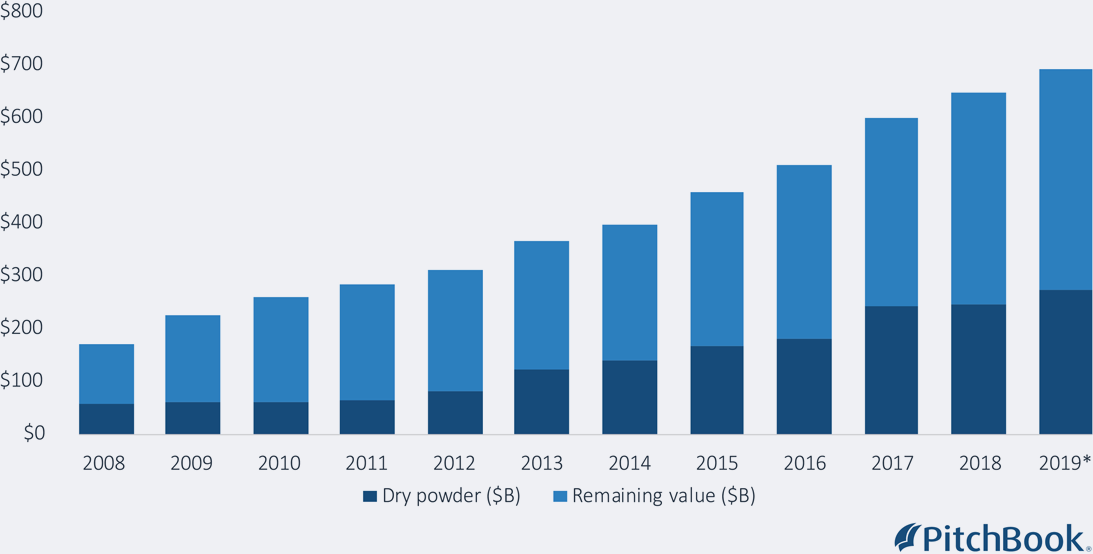 "The distressed players have been looking for a time to deploy, and the current volatility very much plays into their hands," said John Bohill, a Dublin-based partner with asset manager StepStone Group, adding that investors will seek opportunities as more borrowers feel the pinch. "There will be an ability to get involved in a quality business undergoing short-term liquidity issues," he said.

“Yield spreads have widened substantially, and people who were thinking about investing when opportunities improved (or who contracted to do so) understand that there’s been great progress in that direction,” Marks said. “We fully intend to take advantage of the improved investment opportunities."

In an upbeat call with investors, Apollo Global Management Inc.’s co-heads of private equity investing said they are tracking more than 250 potential opportunities to scoop up distressed assets, and pursuing chances to enhance returns by snapping up its own portfolio companies’ discounted debt.

In a private briefing of limited partners Tuesday, Matt Nord and David Sambur said the firm has spent more than $1 billion pouncing on opportunities linked to 10 distressed companies, and that they’re drawing on additional funds from investors to pursue more, according to a person with knowledge of the call. The market turmoil caused by the Covid-19 pandemic has presented a “time to shine,” the duo said repeatedly, even if it’s inflicting pain on some of Apollo’s holdings.

Apollo has so far plowed 14% of its ninth fund into distressed opportunities and expects the figure to rise given the current environment, they said. That compares with a 3% composition of distressed bets in the prior fund.

Activist investor Bill Ackman said he has made a “recovery bet” on the economy, investing $2.5 billion in equities, including upping his positions in several of his portfolio companies and reinvesting in others.

The billionaire investor said he has taken off all the hedges that he put in place for his Pershing Square Capital Management, through shorts in the credit market. Those hedges were put in place to offset the effects of the coronavirus.

Ackman said his hedge fund has used the proceeds to reinvest over the past 10 to 12 days in several of his portfolio companies, including Lowe’s Cos., Hilton Worldwide Holdings Inc. and Warren Buffett’s Berkshire Hathaway Inc.

“That’s about the most bullish thing we’ve done,” he said in a Bloomberg TV interview. “We are all long. No shorts, you know, betting on the country.”

Fundraising in this environment

D.E. Shaw, one of the world’s biggest hedge funds, has raised $2 billion in commitments after opening its doors to new capital for the first time in seven years.

The capital raise is for D.E. Shaw’s $13 billion flagship Composite fund, which fell 0.5% this year through March 20, the person said. The fund trades across asset classes, including fixed income, stocks and asset-backed securities.

Hedge funds are marketing this month’s sell-off as a once-in-a lifetime opportunity to take advantage of unprecedented price dislocations across stocks, bonds and commodities.

LMR Partners, Citadel, Baupost Group and Capital Four Management are trying to persuade clients to inject money into their funds. Capula Investment Management has had talks with some investors as it considers raising fresh capital.

Citadel, with about $30 billion in assets, is raising a new relative value fixed-income fund to target opportunities created by the recent surge in volatility.

Coatue Management is gathering money for a long-only fund.